This is an international conference to discuss how creativity can contribute to sustainable urban development. It aims to inspire the youth who will be in charge of the future of the world. Discussions about creativity as a driver for sustainable urban development will be held among creators, scholars, delegates from UCCN cities and Yamagata citizens. The conference will be a learning opportunity for audiences, especially young people, to gain an understanding of the UNESCO Creative Cities Network, to think as a part of the global community, and share in the vision of tackling social issues together. 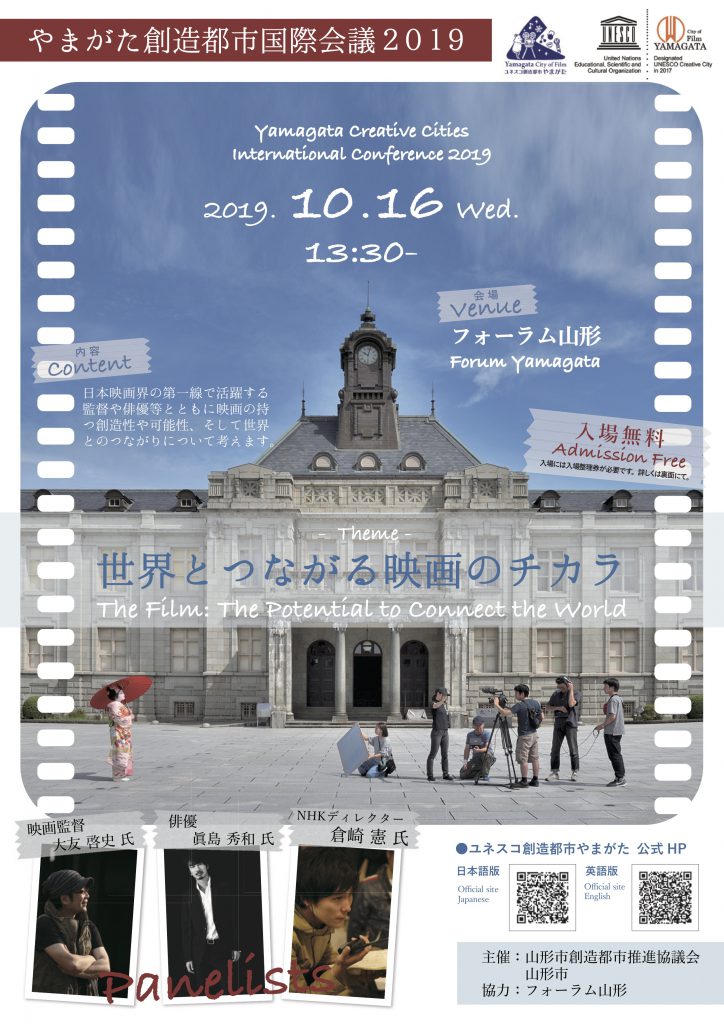 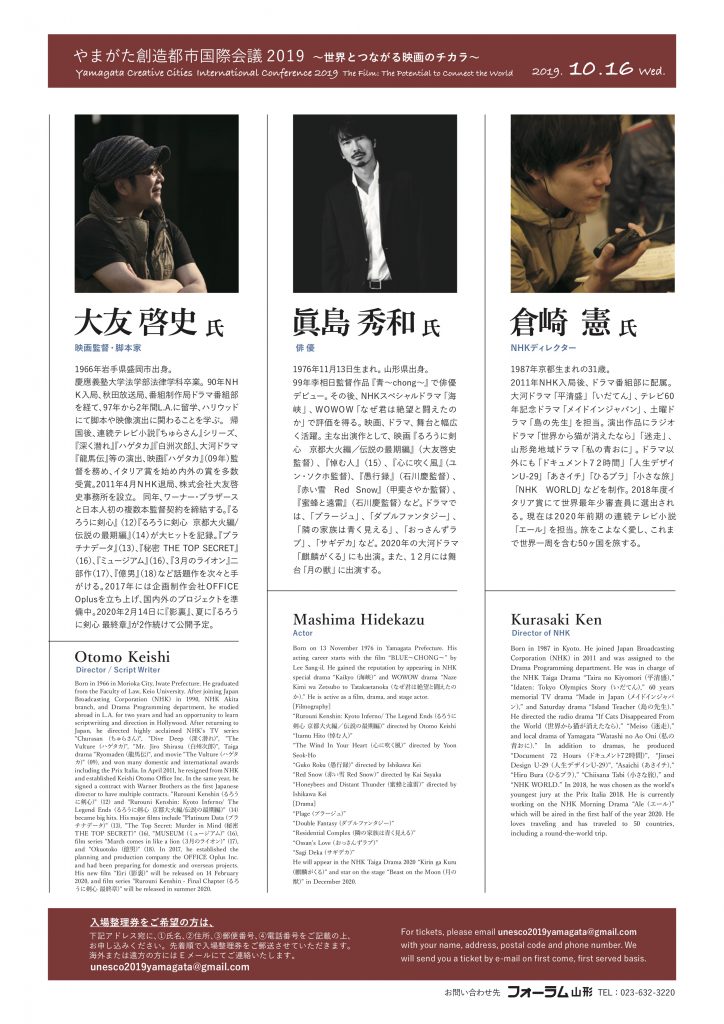 The Film: The Potential to Connect the World

The opening screening starts at 13：30

Together with the leading directors and actor in the Japanese film industry, the conference seeks to explore the potential and creativity of Film in the world. 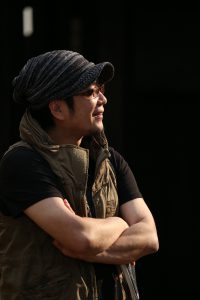 Born in 1966 in Morioka City, Iwate Prefecture. He graduated from the Faculty of Law, Keio University. After joining Japan Broadcasting Corporation (NHK) in 1990, NHK Akita branch, and Drama Programming department, he studied abroad in L.A. for two years and had an opportunity to learn scriptwriting and direction in Hollywood. After returning to Japan, he directed highly acclaimed NHK’s TV series “Churasan (ちゅらさん)”, “Dive Deep (深く潜れ)”, “The Vulture (ハゲタカ)”, “Mr. Jiro Shirasu (白州次郎)”, Taiga drama “Ryomaden (龍馬伝)”, and movie “The Vulture (ハゲタカ)” (09), and won many domestic and international awards including the Prix Italia. In April 2011, he resigned from NHK and established Keishi Otomo Office Inc. In the same year, he signed a contract with Warner Brothers as the first Japanese director to have multiple contracts. “Rurouni Kenshin (るろうに剣心)” (12) and “Rurouni Kenshin: Kyoto Inferno/ The Legend Ends (るろうに剣心 京都大火編/伝説の最期編)” (14) became big hits. His major films include “Platinum Data (プラチナデータ)” (13), “The Top Secret: Murder in Mind (秘密 THE TOP SECRET)” (16), “MUSEUM (ミュージアム)” (16), film series “March comes in like a lion (３月のライオン)” (17), and “Okuotoko (億男)” (18). In 2017, he established the planning and production company the OFFICE Oplus Inc. and had been preparing for domestic and overseas projects. His new film “Eiri (影裏)” will be released on 14 February 2020, and film series “Rurouni Kenshin – Final Chapter (るろうに剣心 最終章)” will be released in summer 2020. 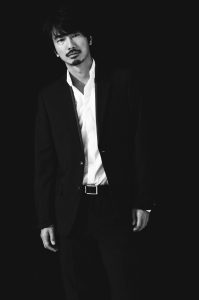 Born on 13 November 1976 in Yamagata Prefecture. His acting career starts with the film “BLUE～CHONG～” by Lee Sang-il. He gained the reputation by appearing in NHK special drama “Kaikyo (海峡)” and WOWOW drama “Naze Kimi wa Zetsubo to Tatakaetanoka (なぜ君は絶望と闘えたのか).” He is active as a film, drama, and stage actor.

“The Wind In Your Heart (心に吹く風)” directed by Yoon Seok-Ho 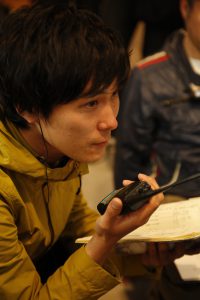 Born in 1987 in Kyoto. He joined Japan Broadcasting Corporation (NHK) in 2011 and was assigned to the Drama Programming department. He was in charge of the NHK Taiga Drama “Taira no Kiyomori (平清盛),” “Idaten: Tokyo Olympics Story (いだてん),” 60 years memorial TV drama “Made in Japan (メイドインジャパン),” and Saturday drama “Island Teacher (島の先生).” He directed the radio drama “If Cats Disappeared From the World (世界から猫が消えたなら),” “Meiso (迷走),” and local drama of Yamagata “Watashi no Ao Oni (私の青おに).” In addition to dramas, he produced “Document 72 Hours (ドキュメント７２時間)”, “Jinsei Design U-29 (人生デザインU-29)”, “Asaichi (あさイチ),” “Hiru Bura (ひるブラ),” “Chiisana Tabi (小さな旅),” and “NHK WORLD.” In 2018, he was chosen as the world’s youngest jury at the Prix Italia 2018. He is currently working on the NHK Morning Drama “Ale (エール)” which will be aired in the first half of the year 2020. He loves traveling and has traveled to 50 countries, including a round-the-world trip.

*You will need a ticket to participate in the event.

For tickets, please email unesco2019yamagata@gmail.com with your name, address, postal code, and phone number. We will send you a ticket by email on first come, first served basis.

In cooperation with Forum Yamagata