which was taken by KURASAKI Ken, a director who resides in Yamagata City.
We had a chance to have an interview with him! 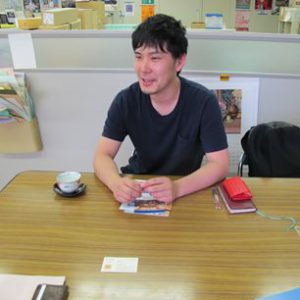 Q. Would you please tell us about the program?
“First of all, NHK Document 72 hours is a very popular program which highly ranked at ‘The best program on TV’, and I am happy to announce it was the first time to take this program in Yamagata. I had interviews with the visitors to the aquarium in Yamagata, and asked about their life.”

Q. What was the most difficult part in the process of this filming?
“In 72 hours, I had to have interviews with many visitors. I felt it was too short to be close to them, and it was difficult to have them talk about their abundant life in this short time.
Moreover, in an aquarium, a distance of visitors was too close that they became shy to talk about themselves. It was difficult, but it was also where I could show my skills as a director.

I greatly appreciate all who were involved in my program! ”

Q. How is your life in Yamagata?
“I love Yamagata! Yamagata has hot springs in every city and town, and I have visited all of them. My final visit was the hot spring in line with Mamurogawa river, and it was amazing.”

He is a very nice young man, who has been a member of activity to support developing countries by establishing elementary school in Laos, and he wishes to disseminate the activities using film.