The 5th CREATIVE CAFE “Papua province and Yamagata” was held!

For this time, we invited two guest speakers from the Yamagata Papua Friendship Association: Mr. Yoshida, the president, and Mr. Awano the member of the board, and had them talk about “Papua province” and “Yamagata Film Package Project”. 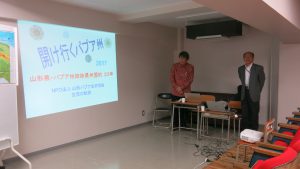 First, Mr. Yoshida, who just came back from the Papua, introduced its history and latest situation. He made our participants eager to visit the Papua!

Next, Mr. Awano reported us about “Yamagata Film Package Project” held in February, 2017.

It is a project to bring films to people in developing cities who are thirsting for a shared motion picture experience. Aimed at high school students who study Japanese, Yamagata citizen volunteers took the films “Yamagata Forged Blades ~Tools for Everyday Life~”, “A Voiceless Cry”, and “The Star Beni Maruttorippu”, subtitled in Indonesian, and showed them in Jayapura, Indonesia. A total of 6 screenings brought 536 people to this event. 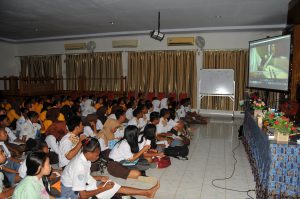 “Art and Building the Region“

Please look forward to it!