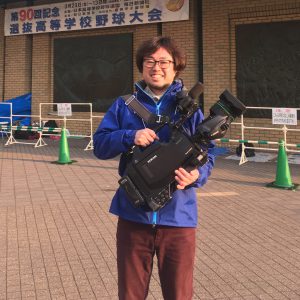 Mr. ITO Kengo was born in 1974 in Oemachi, Yamagata, Japan. He majored in film studies and graduated from the Tohoku University of Arts and Design. He had been a film editor for 10 years at the largest production company in Yamagata Prefecture after his graduation. He was sent to a loan to the broadcasting company in Yamagata and worked as a film production engineer for six years. After he had committed to the travel TV show “Yamagata-hatsu! Tabi no Kenbunroku” as a film editor for two years, he established his own company “Visual Creation KENZWORKS”. It specializes in shooting and editing and also supports film engineering for broadcastings and film productions. His motto is “to do a job from the audiences’ perspective.”