On Friday, 28 July 2017, film commissioners from Yamagata, Shinjo, and Cambodia gathered together at the Yamadera, a famous filming location in Yamagata City, and conducted “Film Commission Cross Talk”. We again welcomed Mr. Chandara, the guest of our first CREATIVE CAFE, to talk about Cambodia Film Commission for he had worked for it since its establishment. Currently, he has been studying film business in Busan, South Korea, to develop mutual cooperation in filmmaking in Asia.

In addition, his wife, Ms. Ngoeum Phally, was working for the office of Yamagata International Documentary Film Festival as an intern. She joined the talk with us and made a short video for us! 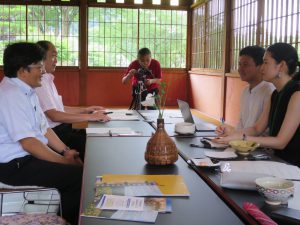 As the intern, she created “2017 YIDFF Trailer“, PR video of Yamagata City, and a videography of the first CREATIVE CAFE.

✨We got comments from the participants!✨

“First, I would like to thank Mr.Chandara for sharing his experiences and thoughts with us. He has been successfully creating job opportunities and activating the regional economies through the activities of Cambodia Film Commission, and his achievements and contributions to the country are amazing. For further future of Cambodia, to enhance its attraction and the prides of the people, I agree that it is more effective for him to promote Cambodia as a film producer rather than the film commission just as he talked to us.

There will be many difficulties to be an outstanding film producer. However, I believe that his works will be delivered not only Cambodia but Japan and the rest of the world, and I am looking forward to watching his films in Yamagata City.”

“It was impressive to talk with him speaking energetically about promoting Cambodia by inviting and supporting filmmaking and tying it up to local revitalization. A film commission is not only to invite and support filmmaking but to promote tourism and revitalize the region. Although we have differences in organizations and activities, it was great opportunity for me to share our common goal as a film commission; to contribute to national and regional developments.”

A film commissioner and a film producer seem like they are on the opposite side but they have a lot in common. I hope his future success as a filmmaker using his experiences in the Cambodia Film Commission.”

At last, when they talked about their future goals and dreams, Mr. Chandara said “I would love to come back to Yamagata for my filmmaking in the future”.

And all of us were so happy to hear his goal and answered “Someday, we all hope that Mr. Chandara will come back for his filmmaking in Yamagata Prefecture, and we, all Film Commissions in Yamagata, will fully support his filming”.

The Cross Talk was so successful that we could not only share information but also deepen our friendship between Cambodia and Japan. 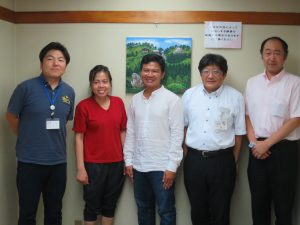