Won the “MVP Award for the most delighted Yamagata 2017”!!

Designation as a UNESCO Creative Cities Network was awarded

the “MVP Award for the most delighted Yamagata 2017”!!

Yamagata Association of Corporate Excutives has chosen to give the “MVP award for the most delighted Yamagata 2017” to the Yamagata City of Film for they have achieved designations as a member of UNESCO Creative Cities Network in the field of film since 31 October 2017. 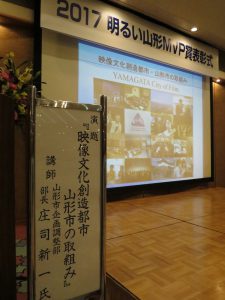 Although Yamagata Prefecture had a delightful year in 2017, it is an honor to receive this award. We deeply appreciated for your support.

Due to an official affair, Mayor of Yamagata was unable to make a speech. However, Mr. SHOJI, the director-general of the Culture Promotion Division gave a speech entitled “Yamagata, a UNESCO Creative City of Film”. 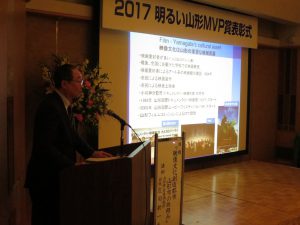