The Indonesian team is developing their film project titled “ONA”. Its rough cut was shown at the Yamagata International Documentary Film Festival in 2017.

“The stay in Yamagata reminded me that Yamagata is a city of film. The place is full of creativity and it flows like a onsen (hot spring).  I think that filmmakers from all over the world needs a place like Yamagata.”

ONA: BETWEEN THE DEVIL AND THE DEEP BLUE SEA

A rebellious girl from a poor island family struggles to adapt to college life in the city and to achieve her dream to become a marine specialist while confronting a troubled past. 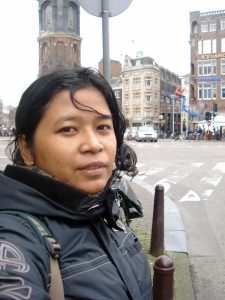 Dwi Sujanti Nugraheni was born and raised in Yogyakarta, Indonesia. She studied Political Science at Gadjah Mada University and worked for several NGOs, both local and international, before she turned to filmmaking. She facilitates video workshops for adolescents and the local deaf community. She worked as an intern at the Appalachian Media Institute, run by Appalshop, in Kentucky, USA in 2007 and at Women Make Movies, in New York City, USA in 2009. She received an Artist Fellowship from the Asian Cultural Council in New York in 2009 to observe the film industry, including film funding and distribution, in the US. In 2013, she received a John Darling Fellowship from the Herb Feith Foundation to take a post-graduate course in digital anthropology at the Digital Humanities Hub at the Australian National University. She is an alumnus of IDFA Summer School 2012, Berlinale Talents 2014, and Talents Tokyo 2015. 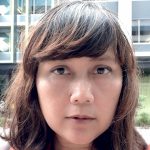 In 2006, she founded Kampung Halaman Foundation to spread access for Indonesian young people to tell their own stories through participatory and collaborative films. She works with professional filmmakers, educators, researchers, non-profit organizations and government institutions. In 2011, her work with Kampung Halaman received an International Spotlight Award of The National Arts and Humanities Youth Program from The President’s Committee on the Arts and the Humanities (PCAH) in the USA, which was presented by First Lady Michelle Obama at a special White House ceremony. 2018, she received the Australian Fellowship Award for “See Me, Hear Me” a Capacity Building to Address Gender Equity for Muslim Women Working in Film and Media from Griffith University and Kinetic Collective, Australia.

Greg was born in Yogyakarta, Inodnesia. He completed his postgraduate from Indonesian Institute of the Arts in 2010 then became lecturer in Faculty Recorded Media Arts, majors on Film and Television, Indonesian Institute of the Arts and Jogja Film Academy. From 2020 he persue about film editing, his first film is Bring Me Flowers (Bawakan Aku Bunga – 2020). In 2004 he joined Fourcolours Films as an Editor for some films. In 2008, he participated in the Cinema Capacity Building Program “Indonesia – Ten Years after Reformasi” proposed by the Goethe Institut Indonesien and The Jakarta Arts Council as an editor for his first feature-lengh documentary DENOK & GARENG. He participated in IDFA Summer School and IDFA Academy 2012 and Post-Production Studio Program at Berlinale Talents 2015.

Because I Love Them